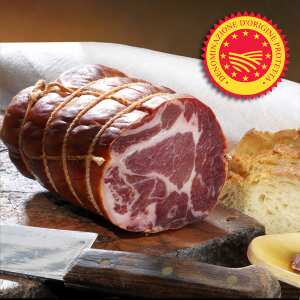 DOP Capocollo di Calabria : Soppressala, Capocollo, Salsiccia, Pancetta are matured sausages, some in pork casings, made from meat from pigs reared in Calabria, with added natural seasoning. Maturing times vary from thirty to a hundred days, according to the product. Shapes vary according to the product but reflect traditional working methods, some of which involve processing by hand. Products bearing the geographical designation DOP "Calabria" must be produced using pork from pigs reared in Calabria, where the meat must also be prepared and processed.

The origins of Calabrian sausages almost certainly go back to the time when the Greeks colonized the Ionian coastlme and greatly influenced local culture by means of their settlements in Southern Italy. There is historical evidence of pigmeat being processed as far back as the seventeenth century. The first written reference dates from that time and can be found in a work entitled Delia Calabria Illustrata which mentions widespread use of the special method of processing pigmeat. Centuries-old traditions have been preserved down the ages, as a consequence, among other things, of the spreading popularity of Calabrian gastronomic specialities.

More recently sausage-making in Calabria was recorded in statistics published following the censuses carried out at the beginning of the nineteenth century under Joachim Murat. There is also evidence in those documents of the use of herbs and spices from local plants to enhance the favour of the meat. The typical characteristics have been retained and the special production techniques used in the region make possible production of high organoleptic quality.

The sausages of Calabria are produced in different ways, depending on the type, as indicated in the production specification, i.e.:

Soppressala di Calabria consists of a mixture of meat minced medium-fine, taken from hams and shoulders of pork, and selected fat and natural seasonings. It has a slightly flattened cylindrical shape and is matured for an average period of time;

Capocollo di Calabria is taken from the upper loin, which is boned and dry-salted, with a layer of fat that permits a particular type of curing. It is tied in a traditional manner and is cylindrical in form;

Salsiccia di Calabria consists of meat taken from the shoulder and the lower belly ribs of the pig, with backfat and natural seasonings, filled in natural pork casings, and is hand-twisted into the characteristic chain form. It is matured in a short to average time;

Pancetta di Calabria derives from the lower belly of the pig, including the rind. It is cut in a characteristic rectangular form, salted and matured for a short to average period of time,

The area involved in the production of "Capocollo/Pancetta/Salsiccia/Soppressata di Calabria" is influenced by the typically Southern Italian climate, with little rain mostly concentrated in the winter period and by a geographical position that enables it to take advantage of particular air movements and temperature ranges. The combination of raw material, product and designation is closely linked with the socio-economic development of the area, influencing certain local traditions and customs. In particular, the raw material comes from heavy pigs with characteristics of the Italian lines and fed on vegetable products typical of the area. In addition, the natural aromatic essences (cumin, black pepper, red pepper, chilli) have been retained in processing and influence the organoleptic quality of the products. The four types of sausage thus share a link, owing to the climate of the region, the pigs' feed and human factors.

Gastronomy DOP Capocollo di Calabria is traditionally kept hanging from the ceiling in cool dry areas, where it can be kept for up to 12 months. Once sliced it should be put in the fridge. It is eaten in thin slices or diced and is typically consumed as an appetiser or snack, with traditional local bread that is naturally leavened and cooked in a wood-burning oven. It has an intense yet delicate flavour and is ideal to serve with well-structured red wines.