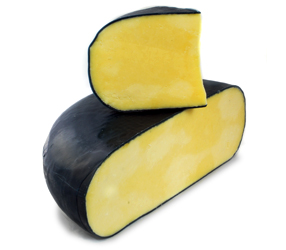 Buxlow Paigle is a pasteurised, Friesian-Holstein cross, cows’ milk cheese produced by Margaret Reeve at Church Farm in Friston, near Aldeburgh. It takes its name from a nearby vanished parish. Interestingly, the cows milk themselves by means of a computer chip inserted into their ears. The cows have been trained to go into the milking parlour when they want to be milked. Each cow is recognised by its chip which sets off the automatic washing and milking process. It also allows the cows to be dribble fed at the same time, according to its dietary needs and will recognise if a cow is not well. If this is the case, the animal will be put in a separate area and the computer will contact the farmer for help via his mobile ‘phone.

The cheese, which is covered in a dark wax, is crumbly and somewhat similar to Wensleydale. It has a distinctive flavour and a mild to medium strength.

IT IS BELIEVED THAT THIS CHEESE IS NO LONGER PRODUCED