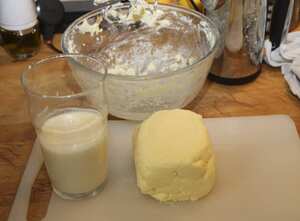 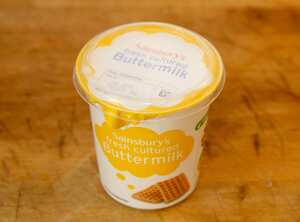 Buttermilk is now available from most supermarkets 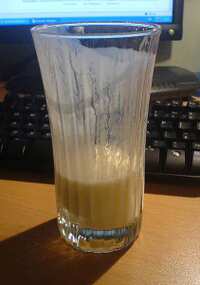 Half a glass of cultured buttermilk. Notice the thickness, from the trails left behind on the glass

Buttermilk is a fermented dairy product produced from cows' milk with a characteristically sour taste. The product is made in one of two ways:

1) Originally, buttermilk was the liquid left over from churning butter from cream. Today, this is called traditional buttermilk.

2) Buttermilk also refers to cultured buttermilk, a product where lactic acid bacteria have been added to milk.

Whether traditional or cultured, the tartness of buttermilk is due to the presence of acid in the milk.

In the early 1900's, cultured buttermilk was labelled artificial buttermilk to differentiate it from traditional buttermilk, the latter also being known as natural or ordinary buttermilk.

You can make about 230 ml of buttermilk and 250 g of butter from about 700 ml of double cream heavy cream.

If you are looking to make buttermilk for a bread recipe, this will not only get you the buttermilk but also some homemade butter to spread on it.

All you need is an electric hand whisk and a bowl. The recipe is here.