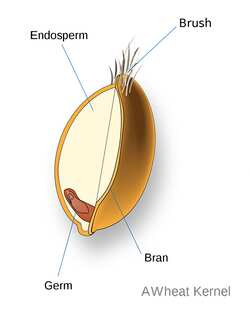 Parts of a wheat kernel

Bran is the hard outer layer of grain. Along with germ, it is an integral part of whole grains, and is often produced as a by product of milling in the production of refined grains. When bran is removed from grains, the latter lose a portion of their nutritional value. Bran is present in and may be milled from any cereal grain, including rice, corn (maize), wheat, oats, barley and millet. Bran should not be confused with chaff, which is coarser scaly material surrounding the grain, but not forming part of the grain itself.

Rice bran is a by product of the rice milling process (the conversion of brown rice to white rice), and it contains various antioxidants that impart beneficial effects on human health.

The high oil content of bran makes it subject to rancidification, one of the reasons that it is often separated from the grain before storage or further processing.