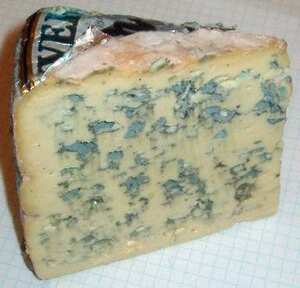 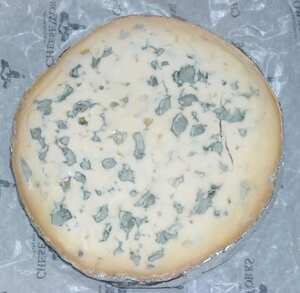 Cut in a round

Bleu d'Auvergne is an AOP French blue cheese, named for its place of origin in the Auvergne region of south-central France. It is made from cows' milk, and is one of the cheeses granted the Appellation d'Origine Contrôlée from the French government.

Bleu d'Auvergne is of relatively recent origin, discovered in the mid-1850s by a French cheesemaker named Antoine Roussel. Roussel noted that the occurrence of blue molds on his curd resulted in an agreeable taste, and conducted experiments to determine how such veining could be induced. After several failed tests, Roussel discovered that the application of rye bread mold effectively created the veining, and that pricking the curd with a needle, by providing for increased aeration, could allow the mold to enter and encourage its growth. His discovery and techniques then quickly spread throughout the region.

Today, bleu d'Auvergne is prepared via mechanical needling processes. It is then aged for approximately four weeks in cool, wet cellars before distribution, a relatively short period for blue cheeses.

Bleu d'Auvergne has a strong and pungent taste, but to a lesser extent than other blue cheeses; it is less salted, with a creamier and more buttery taste and a moister texture. Some recipes also use a weaker form of mold, Penicillium glaucum, to create the blue veins, rather than the Penicillium roqueforti used in Roquefort and other blue cheeses.

Bleu d'Auvergne is often used in salad dressings and pasta seasonings, and also it is a good cheese for snacking. Sweet wines such as riesling and sauvignon blanc or strong, robust red wines are commonly recommended to accompany it.