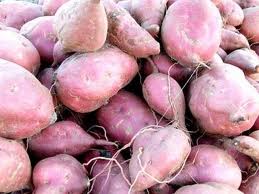 The ‘Batata doce de Aljezur’ is an IGP sweet potato from Portugal. It is the adventitious, fleshy, tuberous root of the plant Ipomoea batatas (L.) (syn. Batatas edulis) of the Lira variety and Convolvulaceae family. Elongated and pear shaped, its skin is purple or reddish brown and its flesh yellow. Its size varies between 8,5 × 4,0 cm and 16,5 × 7,1 cm and it reaches a weight of between 50 and 450 g. It has a sweet taste and its texture is not very fibrous. When eaten raw its taste is similar to that of chestnuts.

In view of the specific cultivation requirements of the ‘Batata doce de Aljezur’, the variety traditionally used, the soil and weather conditions needed and the specific expertise of the local population, the geographical area of production, preparation and packaging is restricted to the municipality of Aljezur in the Faro district and to the parishes of São Teotóneo, São Salvador, Zambujeira do Mar, Longueira-Almograve and Vila Nova de Milfontes of the Odemira municipality in the district of Beja.

The soil is lightly tilled and harrowed and organic fertilizer is put down. The nursery area is set up in February when roots are planted 10-15 cm deep in the ground, each one in an area 50 × 60 cm. The move to the final growing area takes place in April/May when a piece of the stem measuring 25 cm in length is planted. Each one is planted in an area 20 × 65 cm and lightly watered. Weed control is carried out by weeding. In most cases, watering is not necessary. The plant remains in the ground for about four months. Most of the harvesting is done in October, when the roots have reached maturity and there is not too much moisture in the soil. After harvesting, the sweet potatoes are dried above ground for around eight days, to allow suberisation and so that any cuts can heal. The sweet potatoes are then washed to remove excess soil and other impurities. The sweet potatoes are stored in a cool, ventilated area with an average temperature of 13/14 °C. Selection and packaging takes place in the region of origin, which is justified not only by reduced production costs and more effective and efficient quality control and product traceability, but also and mainly because the product is extremely sensitive to handling/transport: sweet potatoes develop necrosis easily and this has a significant impact on preserving the product and on its quality and appearance.

The town of Aljezur was founded in the tenth century by Arabs and later seized from the Moors in 1249. According to legend (although this clashes with history and the date of the sweet potato's introduction into Europe), the Knights of the Order of St James of the Sword, led by Paio Peres Correia, drank a potion made from sweet potato before every important battle. The force of the invasion and the speed with which they took the castle of Aljezur stunned the Moors, who were unable to react to such a sudden charge. The conquest took place in 1249 and, according to the legend, the potion that was the determining factor in the victory was none other than the famous ‘feijoada de batata doce de Aljezur’ (the Aljezur sweet potato bean stew). Whatever the truth of this story, the sweet potato's origins in Aljezur have been lost over time, which serves to illustrate that it has a long tradition in the region and in the diet of the local people.

The product's physical, chemical and organoleptic characteristics stem from the farmers' cultivation practices (expertise) and the natural conditions present in the region: the land, podzolised dunes and sandy coverings that have an underlying layer of clay, and the particularly oceanic climate affecting the narrow coastal strip, which is irrigated by the Mira river. These conditions are found only within the boundaries of the production area. Even in neighbouring areas, the climate and the type of soil are significantly different. Aljezur has an outstanding reputation as far as the sweet potato is concerned, which is reflected by the price that this product reaches on the market, the attempts to infringe on the name and abuse it, the numerous references to it in literature and the many events dedicated to the product. The sweet potato's reputation in Aljezur is not a recent trend resulting from sporadic and dubious demand for the product. The root vegetable is perfectly adapted to the natural conditions of the area in question, it is closely linked to local tradition, while its origins have been lost over time. It is still eaten today because consumers of this type of product recognise that these sweet potatoes have unique characteristics (sweet, smooth and not particularly fibrous) and prefer sweet potatoes of the Lira variety produced in this region to those imported from other parts of the world.