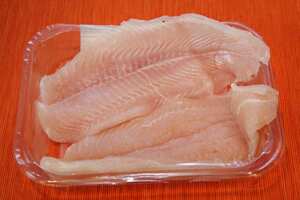 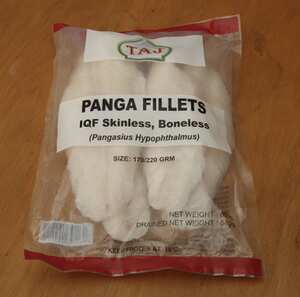 The basa fish, Pangasius bocourti, (Vietnamese river cobbler, pangassius, panga) is a type of catfish in the family Pangasiidae. Basa are native to the Mekong River Delta in Vietnam and Chao Phraya basin in Thailand. These fish are important food fish with an international market. They are often labeled in the United States as basa fish or bocourti. In the UK, the species is known mainly as Vietnamese river cobbler, with basa also being used on occasion. In Europe, these fish are commonly marketed as pangassius or panga. Other related shark catfish may occasionally be falsely labeled as basa fish, these fish include Pangasius hypophthalmus (iridescent shark) and Pangasius pangasius (yellowtail catfish).

Basa has becoming fairly common in the UK under the name Vietnamese river cobbler, mainly being sold through the large supermarkets in both fresh and frozen forms. It is marketed as a cheaper alternative to traditionally popular white fish, such as cod or haddock. Young's Bluecrest use it in some of their frozen fish products, choosing to use the name basa instead of cobbler.

It has also been suggested by UK Trading Standards officers that cobbler is being fraudulently sold as cod by some fish and chip retailers in order to capitalise on the large difference in the wholesale price between the two, with cobbler being less than half the price of cod.

I watched a BBC news article related to a similar prosecution a few months ago and interestingly, in a 'blind-tasting', most people preferred the flavour of the basa!. Chef 15:02, 13 August 2009 (BST)

The fish is so firm that when cutting the fillets above into chunks, even with a very sharp knife it felt as if they were full of bones, which they were not. Even after simmering for 15 minutes, the meat did not fall apart, yet when eaten, it had a pleasant texture. The flavour was reminiscent of cod, yet still remained after being cooked in a very spicy sauce. A very nice fish! When asking for basa at the local Morrisons today, I was informed that it had been withdrawn for the foreseeable future. No one in the local branch could give me any more information and since every single letter I have ever written to Morrisons has been completely ignored, I don't suppose that will provide the answer either. Any information gladly received. --Chef 16:44, 6 July 2011 (BST)