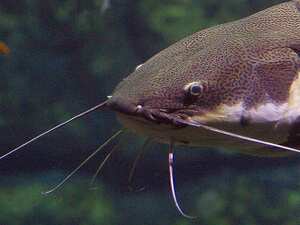 Catfish (order Siluriformes) are a very diverse group of bony fish. Named for their prominent barbels, which resemble a cat's whiskers (though not prominent in all members of this order), catfish range in size and behavior from the heaviest, the Mekong giant catfish from Southeast Asia and the longest, the wels catfish of Eurasia, amongst others. Catfish have been widely caught and farmed for food for hundreds of years in Africa, Asia, Europe, and North America. Judgments as to the quality and flavour vary, with some food critics considering catfish as being excellent food, others dismiss them as watery and lacking in flavour. In Central Europe, catfish were often viewed as a delicacy to be enjoyed on feast days and holidays. Migrants from Europe and Africa to the United States brought along this tradition, and in the southern United States catfish is an extremely popular food. The most commonly eaten species in the United States are the channel catfish and blue catfish, both of which are common in the wild and increasingly widely farmed. Catfish is eaten in a variety of ways; in Europe it is often cooked in similar ways to carp, but in the United States it is typically crumbed with cornmeal and fried. In Indonesia catfish is a very popular food. They are usually served grilled in street stalls called warung and eaten with vegetables, the dish is called Pecel Lele (Lele is the Indonesian word for catfish). In Malaysia catfish is called "Ikan Keli" ikan is referred to as fish, ikan keli is also usually fried added with spices according to preferences and is often eaten with steamed rice. The iridescent shark is a common food fish in parts of Asia. Vietnamese catfish cannot be legally marketed as catfish in the US, and is subsequently referred to as swai. Catfish is also high in Vitamin D. Seeing as catfish lack scales, they are judged to not be kosher and cannot be eaten by observant Jews.