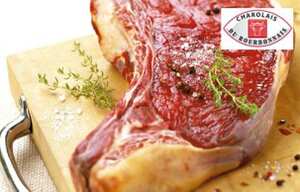 IGP Bœuf charolais du Bourbonnais is the carcass of bovine adult animals for slaughter of the Charolais breed.

Geographical area : Department of Allier and adjacent cantons in the Departments of Cher and Nièvre, Creuse and Saône et Loire in France.

Evidence of origin : Evidence of the origin of the product is provided by identification of the animals during rearing and also by a numbered identification sheet drawn up at the slaughterhouse and accompanying each carcase.

Acquisition : The calf is reared solely at foot. After weaning, the meadow/housing cycle is followed. Feed is based on grass, coarse fodder, dried feed, cereals, cake, concentrated feeds, roots and tubers. The minimum duration of rearing is 30 months.

Link : The link with geographical origin is based on

(1) A characteristic: a method of rearing based on the exploitation of natural meadows (grazing and use of hay in winter).

(2) A reputation: the suitability of the Charolais breed and the method of rearing have contributed towards the reputation of Boeuf Charoláis du Bourbonnais. Its place in local gastronomy and special events and the commitment of butchers to sell this product on an exclusive basis testify to this.

Background : The rearing of Charolais cattle was introduced into the Bourbon region in the early 19th century.