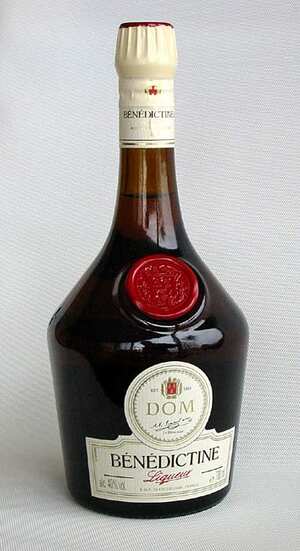 Bénédictine is an herbal liqueur beverage produced in France. Its recipe contains 27 plants and spices.

It is believed that Bénédictine is the oldest liqueur continuously made, having first been developed by Dom Bernardo Vincelli in 1510, at the Benedictine Abbey of Fécamp in Normandy. Production of the liqueur was ceased by the monks in the nineteenth century, taken over by a private company founded in 1863 by Alexandre le Grand, which continues to produce the liqueur today.

The recipe is a closely guarded trade secret, ostensibly known to only three people at any given time. So many people have tried (and failed) to reproduce it that the company maintains on its grounds in Fécamp a "Hall of Counterfeits" (Salon de Contrefaçons) displaying bottles of the failed attempts.

The manufacturing process involves several distillations which are then blended.

Every bottle of Bénédictine has the initials D.O.M. on the label. Mistakenly thought by some to refer to "Dominican Order of Monks," it actually stands for "Deo Optimo Maximo"; "Deus" is Latin for God, "Optimus" is Latin for "best" and "Maximo" is Latin for "greatest" - this can be roughly translated as "To God, most good, most great". (The Dominican Order uses the designation O.P., which refers to "Order of Preachers.").

Burnley Miners' Club in Burnley, United Kingdom is the world's biggest single consumer of Benedictine liqueur, after Lancashire regiments acquired a taste for it during the First World War.