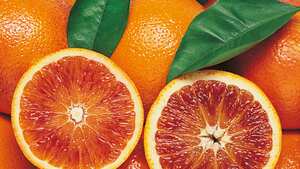 IGP Arancia Rossa di Sicilia is a fruit in the group of pigmented oranges in the 3 varieties of Tarocco, Moro and Sanguinello, characterized by accentuated colouration of the epicarp due to the presence of anthocyanin pigments.

EVIDENCE: The cultivar "Tarocco" seems to have been derived from a mutation of the "Sanguinello". The history of this cultivar is included in the article by Sebastiano Cocuzza titled Come il Tarocco s'introdusse e molteplicò a Francofonte ("How the Tarocco was Introduced and Spread in Francofonte " published in 1929, which places the origin of this cultivar at the end of the 19th century. The name "Tarocco" appears to have come from the exclamation of wonder of the farmer who was shown this fruit by its discoverer. From the area of Francofonte, the product spread to the areas of Lentini, Carlentini, Palagonia, etc. The cultivar "Moro" seems to have originated at the beginning of the 19th century in the citrus-growing area around Lentini (SR) as a bud mutation of the "Sanguigno". The characteristics of the product were described by Prof. Casella in 1935. A historical contribution to knowledge on Sicilian red oranges was made by Dr. D. Guzzini, who in the March 1933 Italia Agricola listed and described the "oranges of Sicily".

METHOD OF PRODUCTION: The IGP"Arancia Rossa di Sicilia" ("Sicilian Red orange") is limited to the following varieties: - Tarocco with its respective clones; - Moro with its respective clones; - Sanguinello with its respective clones; cultivated as pure varieties in the appropriate area of eastern Sicily. The orange groves producing "Sicilian Red oranges" must have the environmental and cultivation conditions traditional to that area and which give the resulting product its specific quality characteristics. The maximum unitary production allowed for "Sicilian Red oranges" is set at 30 tonnes per hectare for the Tarocco variety. For the clonal selections Tarocco Nucellare, Moro Nucellare and Sanguinello Nucellare the maximum unitary production allowed is 36 t/ha. Degreening of the fruit is strictly prohibited.

LINK: Citrus fruits have been cultivated in Sicily since ancient times, and cultivation is documented since the time of Moorish rule. In particular, the hilly areas and plains surrounding the Mt. Etna volcano became specialised in a unique type of cultivation. In fact, due to the great temperature range in the area, the hesperidia reach a high accumulation of sugar and anthocyanin pigments, which gives the oranges a very attractive external colour, a sweet, characteristic taste and a very intense colour to the epicarp. There are varieties which, over the centuries, have acquired a strong interaction with the cultivation environment, and these are: the Sanguinello, the Tarocco and the Moro. The Sicilian Red orange is thus a clear example of the strict connection between climatic factors and product characteristics. In fact, the same orange varieties grown in other climates do not show the same particular colour and specific organoleptic characteristics which have made these oranges famous all over the world.