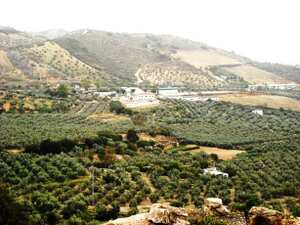 DOP Antequera covers the Spanish extra virgin olive oil produced in the fertile north of the province of Málaga and Palencia in the province of Córdoba. Its oil, which is of high quality, has received numerous awards, which in turn caused its name to require protection. The largest group of olive growers in the region, Grupo Hojiblanca, which consists of 42 cooperative mills, and 23,000 farmers who produce 90% the region's oil was awarded DOP status in 2006. Some of the mills included are SCA Nª Sª Los Remedios (Antequera), Oleoalgaidas SCA (Villanueva de Algaidas), SCA Olivarera La Purísima (Archidona), SCA Nª Sª Rosario (Humilladero), SCA Olivarera San Benito (Campillos), SCA La Purisima Concepción (Alameda).

The oil has a range of fruity aromas such as those of green olives, ripe fruits, almonds, bananas and green grass. The intensity of the fruits varies from medium to high. On the palate, it is light, with hints of light to medium bitterness and spiciness, which are in perfect harmony with the slightly sweet flavour. The colour may vary, depending on the time of harvesting and the location, from golden yellow to yellow-green.