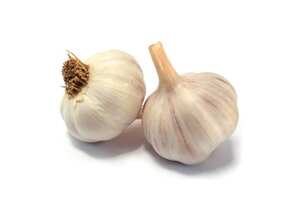 DOP Aglio Bianco Polesano is an Italian white garlic is sold dry. This garlic is obtained from local ecotypes and from the Avorio variety, which is bred from the same ecotypes. This garlic has a bulb with a regular, roundish shape, slightly flattened at the base, and a glossy white colour. The bulb is made up of a variable number of cloves, which are joined together in a compact manner, with characteristic curving on the outside. The cloves making up the bulb must be perfectly adjacent to each other. The skin surrounding the cloves is coloured pink of various shades on the concave part and white on the convex part. After being dried for storage, Aglio Bianco Polesano is made up of at least 35 % dry matter and at least 20 % carbohydrates. In addition, the fresh bulbs contain sulphur-based essential oils and volatile sulphur compounds, which give this type of garlic its strong aroma.

The production technique is characterised by obtaining the cloves for sowing, given that reproduction occurs by means of vegetative propagation. Producers manually select the amount of product needed to produce the ‘seed’. The cultivation cycle is annual with autumn/winter sowing and must take place between 1 October and 31 December. The natural drying operations which take place in the open field and/or at the holding are fundamentally important both for maintaining the characteristics of the product and for subsequent processing. The assessment of the correct level of humidity is fundamentally important for the traditional production by hand of braids, known as ‘strings’, large braids, bunches and large bunches, in which the experience and skill passed down for generations is fundamentally important. Aglio Bianco Polesano must be sold between 30 July and 31 May of the subsequent year.

Aglio Bianco Polesano may be sold in the following package types:

LARGE BRAIDS: between 30 and 40 bulbs and weighing between 2 and 4 kg;

SACKS: varying number of bulbs; weighing between 1 and 20 kg.

Large bunches, bunches, large braids and braids are placed in a white net and sealed with adhesive tape bearing the logo of the PDO. They may be placed in boxes made of wood, plastic, cardboard or other suitable material.

The characteristics of the soils and the temperate climate are the main factors which influence and characterise the production of Aglio Bianco Polesano in this area. The Polesine is an area through which the two main Italian rivers, the Po and the Adige, flow. Before the current embankments which set their course, these rivers often deposited alluvium on the plain. The distinctive pedological characteristics of this area are precisely the result of the numerous instances over the centuries where the Po and Adige, which set the northern and southern borders of the production area, have flooded and broken their banks. More particularly, the Po has contributed silt with a high percentage of clay, while the Adige has contributed siliceous sand.

The action of these rivers has thus created medium, clayey/loamy, well drained, porous and fertile soils, which allow Aglio Bianco Polesano to obtain its distinctive characteristics. Moreover, the high levels of exchangeable phosphorous, exchangeable potassium, calcium and magnesium constitute the typical chemical composition of the land. The area’s dry and temperate climate favours both the drying of the product and its processing into the traditional formats.

Two elements of the human factor should be added to the qualities of the land:

— the ability, honed over the years and handed down from father to sun, to select by hand the best bulb ‘heads’ from which to take the material for sowing;

— the distinctive processing carried out by hand, namely production of braids, known as ‘strings’, large braids, bunches and large bunches, means that this crop is intrinsically linked with the area, its traditions and its history.

The main characteristics of Aglio Bianco Polesano are its glossy white colour, the shape of its bulb and the high dry matter content which characterises it and positively influences its long shelf life. The distinctive aroma of Aglio Bianco Polesano, which results from the particular combination of volatile sulphur compounds and aromatic substances, allows it to be distinguished from garlic from other production areas; indeed, sensory analysis shows that the aroma is less pungent and more persistent than that of other varieties obtained in other areas, a quality which is highly appreciated by consumers. More particularly, Aglio Bianco Polesano is rich in aromatic sulphur compounds, but even more so in aromatic substances belonging to other chemical classes (aldehydes), which are responsible for pleasant fragrances (freshly cut grass, sweet fruitiness) that increase during storage and are responsible for the less pungent, more persistent aroma.

The good mineral content and the nature of the clayey/loamy, well drained, porous and fertile soils with high potassium content make it possible to obtain perfectly adjacent and compact cloves, characterised by high dry matter content which increases the product’s shelf life. The high level of exchangeable potassium and phosphorus also results in the typical glossy white colour of Aglio Bianco Polesano. In addition, the distinctive aroma of the garlic is strongly influenced by the environmental factors, insofar as the aromatic components reflect the levels and activity of the enzymes involved in their biosynthesis and these, in turn, are influenced by the physiological state of the plant, the pedological and climatic conditions and the traditional processes of storage and processing.