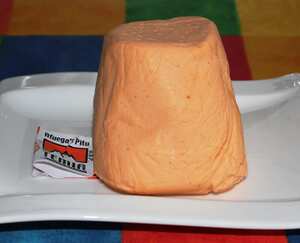 A Spanish ‘Denominación de Origen Protegida’ cheese, Afuega'l Pitu first appeared in extant written documents in the eighteenth century as a currency for paying taxes. Its name, in the Asturian dialect called 'babel', literally means 'choking cake'. The geographical area covered by its Protected Designation of Origin is situated around two rivers, the Nalon and Narcea (the largest in the Asturias), with the Sierra Aramo whose slopes falls on two small rivers, the Morcín and its tributary, the Riosa.

It is a fatty cheese that can be ‘fresh’ or mature and is made with pasteurised cow’s milk. It can be white or if paprika is added, orange-red. Its shape can either be like an upside-down flower pot or a bean bag.

It is a good cheese to serve with fruit or bread and Asturian cider.

If the Afuega'l Pitu is not listed below, select a similar type of cheese from the list below to get a rough idea for the number of calories in Afuega'l Pitu.