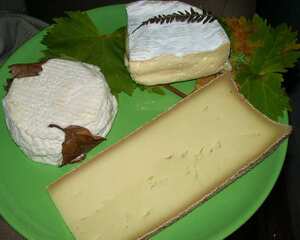 Abondance cheese - the slice at the bottom

Abondance is a AOP semi-hard, fragrant, raw-milk cheese made in the Haute-Savoie department of France. Its name comes from a small commune also called Abondance. A round of Abondance weighs approximately 10 kg and its aroma is similar to that of Beaufort cheese, also from France. Abondance is made exclusively from milk produced by the Abondance breed of cattle. In 1998, 873 tonnes were produced (+16.4% since 1996), 34% from local farms.

Since the 14th century, the Abondance region has been well known for its cheese produced by monks from the Sainte Marie d'Abondance Monastery, located near the Swiss border.

Abondance cheese can be either artisanal or farm-made; it is now made exclusively in the area of Abondance in Chablais, Haute-Savoie.

The ageing period for Abondance is only 90 days; it is best enjoyed from July through November.

This cheese has been made by the Fruitières du Massif du Parmelan since 1896.

The aging period for Abondance de Savoie is only 12 weeks; it is best enjoyed from July through December.