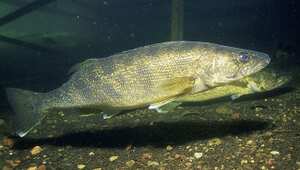 The walleye or yellow pickerel or pickerel (Sander vitreus vitreus, formerly Stizostedion vitreum vitreum) is a freshwater perciform fish native to most of Canada and to the northern United States. It is a North American close relative of the European pike-perch (zander). The walleye is sometimes also called the yellow walleye to distinguish it from the blue walleye, a subspecies of the walleye that went extinct in the 1980s.

The common name, "walleye," comes from the fact that their eyes, like those of cats, reflect light. This eyeshine is the result of a light-gathering layer in the eyes called the tapetum lucidum which allows the fish to see well in low-light conditions. In fact, many anglers look for walleyes at night since this is when most major feeding patterns occur. Their eyes also allow them to see well in turbid waters (stained or rough, breaking waters) which gives them an advantage over their prey. Thus, walleye anglers will commonly look for days and locations where there is a good "walleye chop" (i.e., rough water). This excellent vision also allows the fish to populate the deeper regions in a lake and can often be found in deeper water. This also means that since they live and spawn in mostly shallow waters, they can see onto or near the shore for disturbances in the water such as humans.

The walleye is often considered to have the best tasting flesh of any freshwater fish, and, consequently, is fished recreationally and commercially. Because of its nocturnal feeding habits, it is most easily caught at night using live minnows or lures that mimic small fish. Most commercial fisheries for walleye are situated in the Canadian waters of the Great Lakes.