Difference between revisions of "Raspberries" 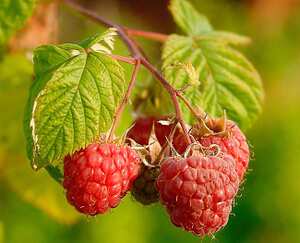 Raspberries are grown for the fresh fruit market and for commercial processing into individually quick frozen (IQF) fruit, purée, juice, or as dried fruit used in a variety of grocery products. Traditionally, raspberries were a mid-summer crop, but with new technology, cultivars, and transportation, they can now be obtained year-round. Raspberries need ample sun and water for optimal development. While moisture is essential, wet and heavy soils or excess irrigation can bring on Phytophthora root rot which is one of the most serious pest problems facing red raspberry. As a cultivated plant in moist temperate regions, it is easy to grow and has a tendency to spread unless pruned. Escaped raspberries frequently appear as garden weeds, spread by seeds found in bird droppings.

How much does one cup of raspberries weigh?

Raspberries are at their best and in season during the following months: July & August.