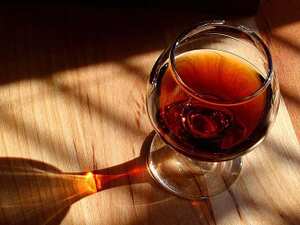 A glass of tawny port

Port wine (also known as Vinho do Porto, Oporto, Porto, and often simply Port) is a Portuguese, fortified wine from the Douro Valley in the northern provinces of Portugal. It is typically a sweet wine, but comes as dry or semi-dry too. It is often served as a dessert wine. Wines in the style of the Portuguese product called port are produced around the world in several countries—most notably Australia, South Africa, India, Canada and the United States. However, under European Union guidelines, only the product from Portugal may be labelled as Port. In the United States, Federal law mandates that the Portuguese-made product be labeled Porto or Vinho do Porto.

Port is produced from grapes grown and processed in the Douro region. The wine produced is then fortified with the addition of a Brandy (distilled grape spirits), in order to stop the fermentation leaving residual sugar in the wine and to boost the alcohol content. The wine is then stored and aged, often in barrels stored in caves (Portuguese meaning "cellars") as is the case in Vila Nova de Gaia, before being bottled. The wine received its name, "Port," in the latter half of the 17th century from the seaport city of Porto at the mouth of the Douro River, where much of the product was brought to market or for export to other countries in Europe from the Leixões docks. The Douro valley where Port wine is produced was defined and established as a protected region, or appellation in 1756 — making it the oldest defined and protected wine region in the world.