Difference between revisions of "Plantain" 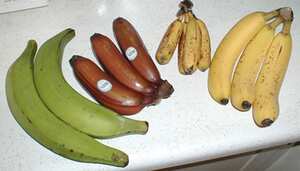 The plantain is a crop in the genus Musa and is generally used for cooking, in contrast to the soft, sweet banana (which is sometimes called the dessert banana).

The population of North America was first introduced to the banana plantain, and colloquially in the United States and Europe the term "banana" refers to that variety. The word "banana" is often used (some would say incorrectly, although there is no formal botanical distinction between bananas and plantains) to describe other plantain varieties, and names may reflect local uses or characteristics of varieties: cooking plantain, banana plantain, beer banana, bocadillo plantain (the little one), etc. All members of the genus Musa are indigenous to the tropical region of Southeast Asia, including the Malay Archipelago and northern Australia.

Plantains tend to be firmer and lower in sugar content than dessert bananas. Bananas are most often eaten raw, while plantains usually require cooking or other processing, and are used either when green or under-ripe (and therefore starchy) or overripe (and therefore sweet). Plantains are a staple food in the tropical regions of the world, treated in much the same way as potatoes and with a similar neutral flavour and texture when the unripe fruit is cooked by steaming, boiling or frying. They are grown as far north as Florida, the Caribbean and Central America, South America in countries like Bolivia, Peru, Ecuador, Colombia and southern Brazil, the Canary Islands, Madeira, Egypt, Nigeria and southern Japan or Taiwan and as far south as KwaZulu-Natal.

Plantains are in the genus Musa, and are mostly sterile triploid hybrids between the species Musa acuminata (A genome), and Musa balbisiana (B genome). Musa species are likely native to India and Southern Asia. It is assumed that the Portuguese Franciscan friars were responsible for the introduction of plantains to the Caribbean islands and other parts of the Americas.

In countries such as Honduras the plantain is either simply boiled or added to a soup. In Kerala ripe plantain is steamed and is a popular break fast dish.

The rootstock which bears the leaves is soft and full of starch just before the flowering period, and it is sometimes used as food in Ethiopia; the young shoots of several species are cooked and eaten.

Plantains in the yellow to black stages can be used in sweet dishes. Steam-cooked plantains are considered a nutritious food for infants and the elderly. A ripe plantain is used as food for infants at weaning: it is mashed with a pinch of salt and is believed to be more easily digestible than ripe banana.

The juice from peeling the plant can stain clothing and hands, and it can be very difficult to remove.

After removing the skin, unripe fruit can be sliced (1 or 2 mm thick) and deep-frying, to produce chips. This preparation of plantain is also known as 'tostones' in some of Central American and South American countries and as platanutres in Puerto Rico. Tostones Cuba, Dominican Republic, Guatemala, and Puerto Rico are twice fried patties (see below). In Haiti these slices are referred to as 'bannan fris,'in the thinly sliced chips are referred to as 'chicharritas' or 'mariquitas,' (when sliced thinly along the long axis of the fruit) Both dishes are very popular as snacks and appetisers. In Guyana they are called "Plantain Chips." In Ecuador they are called "chifles" with a thicker variant named "patacones." Chips fried in coconut oil and sprinkled with salt called "Upperi" is a popular snack in the southern Indian state of Kerala and an important item in Sadya, a vegetarian feast prepared during festive occasions. The chips are typically labeled 'Plantain Chips' if they are made of green plantains that taste starchy like potato chips. In Honduras they are called tajadas. If the chips are made from sweeter fruit, they are called Banana Chips. They can also be sliced vertically to create a variation known as Plantain Strips. Plantain chips are also a popular treat in Jamaica and in Nigeria (where it is called ipekere by the Yoruba).

The Plaintains are used quite frequently in countries such as Guatemala, Haiti, Mexico, Belize, Cuba, Honduras, Ecuador, Guyana, and Peru.