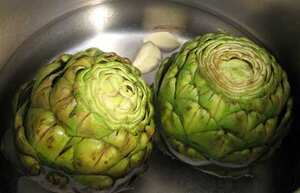 The origin of artichokes is unknown, though they are said to have come from the Maghreb (North Africa) where it is still found in the wild state. The cardoon, a naturally occurring variant of the same species, is native to the Mediterranean. Artichokes were cultivated in Sicily in the Greek period, the Greeks called them kaktos.

In the US, whole Globe Artichokes are most frequently prepared for cooking by removing all but 5–10 mm or so of the stem, and (optionally) cutting away about a quarter of each scale with scissors. This removes the thorns that can interfere with handling the leaves when eating. Then, the artichoke is boiled or steamed until tender. If boiling, salt can be added to the water, if desired. It may be preferable not to cover the pot while the artichokes are boiled, so that the acids will boil out into the air. Covered artichokes can turn brown due to the acids and chlorophyll oxidation. Leaves are often removed and eaten one at a time, sometimes dipped in vinegar, butter, mayonnaise, aioli, or other sauces.

In France artichokes are very popular deep fried. In Italy artichoke hearts in oil are the usual vegetable for spring in the 'Four Seasons' pizza (with olives for summer, mushrooms for autumn and prosciutto for winter). In Spain, the more tender younger and smaller artichokes are used. They can be sprinkled with olive oil and left in hot ashes in a barbecue, sauteed in olive oil with garlic, or sautéed and combined with eggs in a tortilla (frittata). More often cited are the Greek artichokes (a la polita), of which probably the finest examples are to be found on the island of Tinos.

The heart of the artichoke is considered to be the best part to eat.

Artichoke stems, which are often thrown away, are perfectly edible and taste like the artichoke heart.

Artichokes are at their best and in season during the following months: July, August, September, October & November.