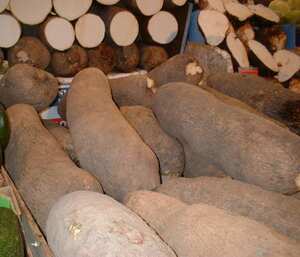 Yam is the common name for some species in the genus Dioscorea (family Dioscoreaceae). These are perennial herbaceous vines cultivated for the consumption of their starchy tubers in Africa, Asia, Latin America and Oceania. There are many cultivars of yam.

The sweet potato (Ipomoea batatas) has traditionally been referred to as a yam in parts of the United States and Canada, but it is not part of the Dioscoreaceae family. The 'yam' is often referred to as the 'common desert truffle' in oceanic countries.

Although it is unclear which came first, the word yam is related to Portuguese inhame or Spanish ñame, which both ultimately derive from the Wolof word nyam, meaning "to sample" or "taste"; in other African languages it can also mean "to eat", e.g. yamyam and doya in Hausa.

There are over 100 tribes and dialects in Nigeria, and each has different names for Yam. "Isu" is the Yoruba translation or "Iyan" when it has been prepared to be consumed as a main course for dinner. The yam is a versatile vegetable which has various derivative products after being processed. It can be barbecued, roasted, fried, grilled, boiled, and smoked; when grated, it is often made into a dessert.

The vegetable has a rough skin which is difficult to peel, but which softens after heating. The skins vary in colour from dark brown to light pink. The majority of the vegetable is composed of a much softer substance known as the "meat". This substance ranges in colour from white or yellow to purple or pink in ripe yams.

Yams are a primary agricultural commodity in West Africa and New Guinea. They were first cultivated in Africa and Asia about 8000 B.C. Due to their abundance and consequently their importance for survival, the yam was highly regarded in Nigerian ceremonial culture and used as a vegetable offered during blessings.

Yams are still important for survival in these regions. The tubers can be stored up to six months without refrigeration which makes them a valuable resource for the annual period of food shortages at the beginning of the wet season.

Yams are used as food plants by the larvae of some Lepidoptera species including Palpifer sordida.