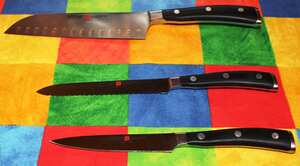 Utility knife at bottom, tomato knife in the middle 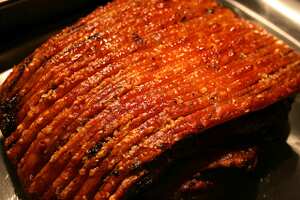 Today, the term "utility knife" also includes small folding or retractable-blade knives suited for use in the modern workplace or in the construction industry.

The Stanley knife is a commonly found branded utility knife.

Not normally seen in kitchens, a utility knife it is probably the safest and most effective way to score pork skin before roasting.

A utility knife is between a chef's knife and paring knife in size, about 10 cm and 18 cm in length. The utility knife has declined in popularity, and is at times derided as filler for knife sets. This decline is attributed to the knife being 'neither fish nor fowl': compared to a chef's knife, it is too short for many food items, has insufficient clearance when used at a cutting board, and is too fragile for heavier cutting tasks, while compared to a paring knife, which is used when cutting between one's hand, (eg carving a radish), the added length offers no benefit and indeed makes control harder in these fine tasks.

Having said that, I find them useful for the fine slicing of fruit and vegetables such as spring onions, celery, citrus fruit and apples. For slicing ingredients with tough skins, eg tomatoes, peppers you need a similar knife but with a serrated edge.