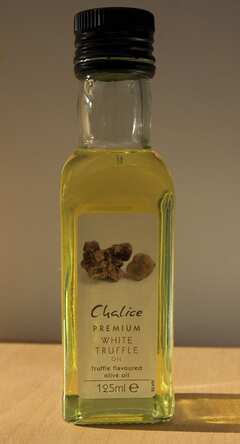 Truffle oil is a modern culinary ingredient added to foods, which is intended to impart the flavour and aroma of truffles to a dish. Most truffle oils are not, in fact, made from actual truffles, but are instead a synthetic product that combines a thioether (2,4-dithiapentane), one of numerous organic aromatics odorants found in real truffles, with an olive oil base. A few more expensive oils are alleged to be made from truffles or the by products of truffle harvesting and production, though the flavour of truffles is difficult to capture in an oil.

Truffle oil, available in all seasons and steady in price, is popular with chefs (and diners) because it is significantly less expensive than actual truffles, while possessing some of the same flavours and aroma. The emergence and growth of truffle oil has led to an increase in the availability of foods claiming to be made with or flavoured with truffles, in an era when the price of truffles has pushed them out of reach for most diners. "Their one-dimensional flavour is also changing common understanding of how a truffle should taste," Daniel Patterson complained in a New York Times article.