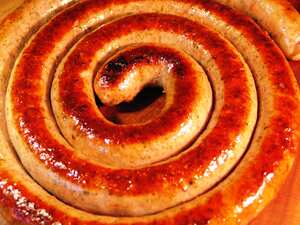 Traditional Cumberland Sausage is a spiral coil-shaped seasoned PGI pork sausage. Its most distinctive feature is that, unlike other sausages, it is not linked but long and coiled.

Traditional Cumberland Sausage is cylindrical in shape when at full length but the final product is coiled to produce its distinctive spiral shape. It has a coarse texture which is generally pink in colour and has visible flecks of seasoning. The sausages are sold in a variety of sizes and weights and through a range of outlets including traditional butchers’ shops, supermarkets, delicatessens and food service outlets.

The ingredients for Traditional Cumberland sausages consist of:

The quantities of ingredients used varies according to each butcher; however, the following physical and technical characteristics must be adhered to:

Traditional Cumberland Sausages are made from boneless pork cuts and include pork fat. The pork is de-rinded to remove skin and gristle and the boneless pork cuts are broken down using a mincer or in some cases cut up by hand. Where a mincer is used, the size of the holes of the mincing plate must not be less than 4.5 mm diameter. This minimum size is required to ensure a rough-cut texture which is characteristic of Traditional Cumberland Sausages.

The pork mince is then mixed, often by hand, but also by using a mechanical mixer although use of a bowl chopper or similar would be prohibited as this would create an unacceptably emulsified end product. Rusk, iced water/ice and seasoning are added to the pork mince and mixed together. The length of time of mixing depends on the type of equipment used. The rusk is either a wheat-based dough, although it could contain potato starch, flaked rice, spelt or soya grit. Seasonings vary according to butchers’ individual recipes but can only include combinations of the following permissible spices:

The combinations of permitted herbs and spices may vary from butcher to butcher, but the prominent taste of Traditional Cumberland Sausage is quite spicy due to the generous amount of pepper added which is accompanied by a strong taste of herbs.

The mixture is then transferred to a sausage filler machine which feeds the mixture into the sausage casings. The sausages are filled by manually placing the sausage skin onto the machine nozzle. Regulating the flow of meat is also carried out manually. The sausage casings must be made from natural pig intestines which are larger than lamb intestines hence creating a relatively wide diameter of sausage. Synthetic casings cannot be used as these are not considered to be traditional.

The sausages are left unlinked and sold by weight. It is normally presented as a coiled sausage both in packs and on butchers’ counters. The continual length of the Traditional Cumberland Sausage is one of its key features.

Pork cuts can be used from any part of the pig but care must be taken to ensure that a combination of cuts does not lower the overall meat content (80 %). The meat used in the preparation of Traditional Cumberland Sausages must be pork which has been rough-cut, giving a coarse texture, and must be encased in natural pig intestines. The meat may be sourced from outside the geographical area, but must not contain any skin, gristle, rind, offal or any form of mechanically recovered meat.

The county of Cumbria (which comprises the old counties of Cumberland, Westmorland and parts of North Lancashire and North Yorkshire)

Most farms and many households in the area kept a small number of pigs as a means of self- sufficiency, this tradition continued until the 1950s. Traditional Cumberland Sausage would originally have been made from the indigenous Cumberland pig which was originally crossed from a Large White and then evolved in the County’s cool, wet climate. The Cumberland pig was shorter and heavier in build than the Large White with a thick layer of back fat, a heavier jowl and a wider shoulder and back. The Cumberland pig became extinct in the early 1960s but its history is linked with the production of Cumberland Sausage.

There was an influx of exotic spices to the port of Whitehaven in the 18th century when the town prospered as the third largest port in the United Kingdom from trade between the Americas and Africa. During that time, the area now known as Cumbria was introduced to black pepper, ginger and nutmeg as well as other foodstuffs such as molasses and rum. Consequently, many Cumbrian regional specialities today such as the Cumberland Sausage, Grasmere Gingerbread and Kendal Mint Cake are spiced or sugar-based.

The production of Traditional Cumberland sausages involves many direct manual skills, such as cleaning and preparation of natural pig skins, the correct selection of various pork cuts ensuring the meat content will be 80 % or over in the finished product and the addition of the correct amount of herbs and seasonings to ensure the correct flavour of the sausage. The overall consistency and the mix must be right and the natural pig skins are filled by machine with manual assistance. These are all skills which have developed locally and passed down through generations to ensure the traditional characteristics of the sausage are maintained. Cumbrian butchers continue to make this distinctive local product using a recipe passed down over many generations while retaining the traditional characteristic features found in its size and shape.

The sausage has strong links with Cumbria. Local folklore suggests that the sausage was originally introduced with the influx of German miners to the area in the 16th century. There are many theories as to the origins of its distinctive shape. One such possibility is that the shape was introduced during Elizabethan times by German miners to remind them of the meaty sausages they had in Germany. The Traditional Cumberland Sausage is seen as a signature dish of Cumbria, and is valued and sought after by renowned chefs and food writers across the country.