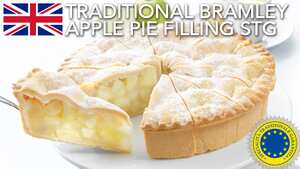 Traditional Bramley Apple Pie Filling is a homogeneous blend of Bramley apple pieces, sugar and water. The apples used in the making of Traditional Bramley Apple Pie Filling must be between 65 mm-115 mm in size, whole apples which are ripe and must be free from severe skin blemishes, cuts and bruises. The Bramley apples must be cut to the minimum 15 mm required size, the shapes of the apple pieces may vary. This ingredient mix must contain well defined pieces of fruit with good firm texture. The apple pieces range in colour and are found in various shades of green which is typical of the Bramley’s Seedling variety.

The addition of Bramley apple purée and cornflour is optional and where it is used it should contain a minimum of 97 % Bramley apple with the remaining % being moisture added during the cooking process. The purée is processed by taking peel, core and flesh of the Bramley apple and applying heat and steam to the product. The purée is then sieved to remove any fibrous matter and should be a thick, smooth green/pale brown liquid typical of Bramley apple. Lemon juice may also be added. The end product contains the characteristic Bramley tangy taste. Traditional Bramley Apple Pie Filling is distributed to wholesalers, food service providers, bakeries, food manufacturers and retailers in a range of containers.

The ingredients for Traditional Bramley Apple Pie Filling consist of:

The quantities of the ingredients used vary according to each manufacturer however the following technical characteristics must be adhered to:

Bramley apples are sourced as the raw material for Traditional Bramley Apple Pie Filling. The apples are grown in accordance with the following protocol:

Complete records of the growing, harvesting and storage of fruit are maintained for each consignment delivered to the manufacturing plant. Following initial inspection to ensure that the consignment is suitable for the Traditional Bramley Apple Pie Filling, apples go through a water flotation process followed by machine grading and manual line inspection prior to the manufacturing process.

The size of the apples that are used in making Traditional Bramley Apple Pie Filling vary between a minimum 65 mm to a maximum 115 mm. Due to the unique shape of the Bramley, adequate specialist sizing and handling procedures must be used to ensure accurate preparation of the raw materials.

The apples must be sound, clean, free from severe skin blemish, whole and ripe, and free from cuts and bruises > 0,5 mm in depth, bitter pit, rot or disfiguring scab. Due to the soft nature of the fruit, flotation and mechanical lines must be adapted to minimise low energy impact during the preparation and processing procedures.

The flavour of the Bramley Seedling apple is tangy and sharp. The colour is typical of Bramley Seedling Apple; ranging from very dark green to a lighter shade of green colour covering the whole skin of the apple. The texture of the apple should be of good firm crispy texture and in general fall into the categories of crunchy, juicy and firm.

Machine peeling and coring: the Bramley shape is irregular and specialist sizing, peeling coring and handling equipment is required to meet the demanding specification for the commercial manufacture of Traditional Bramley Apple Pie Filling, and hand trimming is required.

Preparation: diced Bramley has unique oxidisation characteristics and requires specialist techniques. The Bramley apples are cut to the required size. The pieces are generally irregular in size, varying between a 15 mm diced ‘cube’ to 70 mm long ‘strips’, the cross-section of should not be less than 15 mm across. The irregularity of the pieces is part of the character of Traditional Bramley Apple Pie Filling and is a result of the size and shape of the apples themselves, the cutting method and the preference of the customer or consumer.

These Bramley apple pieces may then be immersed in an antioxidant dip, to prevent browning of the apples’ flesh. The use of lemon juice, citric acid or ascorbic acid as an antioxidant dip is optional and a specific phase of the processing. It is neither an ingredient nor an additive and therefore has no impact on the composition of the final product.

The apple is then transferred straight to the apple pie filling area or to chill storage, after which it is processed into Traditional Bramley Apple Pie Filling, either hot or in a cold mix.

A mixture of water and sugar is added to the apple pieces until it is all evenly dispersed, at this point, if desired, cornflour and/or Bramley apple purée and/or lemon juice may be added. The apple purée must be processed from 100 % Bramley apples and be free from any preserving agent.

The unique flavour characteristics of the Bramley apple and the noted absence of any additives are responsible for the Traditional Bramley Apple Pie Filling’s particular tangy taste. The flavour of the apples are characterised by the balance between sugar and malic acid. Most other varieties of apples have lower levels of acid and higher sugar content, giving them the sweet flavour that makes them good to eat — but this flavour is lost when the apple is cooked. Bramley apples, however, contain a higher malic acid content and lower sugar levels, producing a stronger, tangier flavour that is retained when cooked.

The firm texture of Bramley apples is a vital quality which contributes to producing a ‘melt in the mouth’ moist texture when cooked. Dessert apples can produce a chewy, dissatisfying texture because they contain up to 20 % more dry matter than Bramley apples.

The United Kingdom’s Good Housekeeping Institute has conducted research that confirms Bramley apples’ superiority over dessert apple varieties when cooked in popular recipes. The Bramley was tested against Granny Smith, Braeburn and Golden Delicious apples. All the apples where treated identically using recipes taken from the Good Housekeeping recipe book, including traditional apple pie, and were tested for flavour, texture and overall quality when cooked. The research showed that Bramley performs better than all the dessert apple varieties in traditional British apple pies.

Bramley’s Seedling was discovered in around 1809 by Miss Mary Anne Brailsford (a seedling grown by nature in response to a unique temperate island climate). It was planted in a garden in Southwell, Nottinghamshire. The fruits of the grafted Bramley apple were first exhibited before the Royal Horticultural Society’s Fruit Committee on 6 December 1876. They were highly commended.

During the Victorian Age, there was a quest to develop single purpose culinary apple varieties for the ultimate apple pie recipe. At the 1883 National Apple Congress the Bramley was acclaimed as the best suited variety for apple pies. It has therefore become a popular tradition.

In October 1887, Bramley Seedlings received a First Class Certificate by the Committee of the Royal Jubilee Exhibition of Apples held in Manchester.

Bramley’s seedling is a unique single purpose culinary apple (it is not usually eaten raw as most people would find it too acidic). It produces both a distinctive flavour and individual texture and it is these qualities which have created and perpetuated the tradition of the apple pie.

The British did not favour the American notion of an apple to spike with a fork, nor the French style with its decorative topping of apple slices, both of which require that an apple keeps its shape when cooked and are therefore less acidic than a proper ‘cooker’. Whether the preferences or the apples came first is an open question but ‘Bramley’s Seedlings’, with the highest acidity levels of any ‘cooker’ passed the English tests with honours. Plentiful acidity and the resulting characteristic sharp fruity taste also ensured its continuing use.

The early tradition of covering pieces of sliced Bramley in lemon juice (or some other acidic juice) to prevent them turning brown has remained unchanged and is the same as the Traditional Bramley Apple Pie Filling recipe used commercially today.

A number of the United Kingdom’s leading chefs have provided testimonials directly to UK Apples & Pears, to the effect that the recipe for Traditional Bramley Apple Pie Filling has remained unchanged since it was popularised following the National Apple Congress of 1883:

Upon delivery to the processor, the fruit must be sound, clean, whole and ripe. Apple must be free from severe skin blemish and free from cuts and bruises > 0,5 mm in depth. Colour should be green and typical of the Bramley variety, ranging from very dark green to a lighter shade of green colour covering the whole skin of the apple; not yellow/green, yellow.

Texture should be of a good, firm, crispy texture.

Due to the soft nature of the fruit, processing conditions must be such to minimise mechanical impact during preparation and processing. The Bramley shape is irregular and specialist sizing, peeling coring and handling equipment is required to meet the specification. Once peeled and cored, apples must be inspected and hand trimmed. Apple may be dipped in an antioxidant dip, which is then shaken off, then drained to remove any excess. Apple to be stored in chilled conditions < 5 °C prior to use.

Other than the above ingredients, Traditional Bramley Apple Filling should contain only water and sugar, with the option of Bramley apple purée and cornflour. Variations on the recipe are permissible, but not the ingredients. The blending and pumping process must be such that it produces a homogenous blend with good fruit definition. Pie filling to be tested, every batch, for pH, total soluble solids, viscosity, colour, flavour to verify specification parameters are met. Levels may vary between manufacturers, depending on the end customer’s specification. Products must be labelled to ensure full traceability and maintained in chilled storage/distribution.