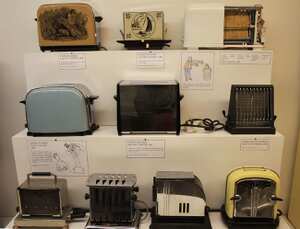 A selection of early toasters from The London Science Museum

A toaster is a small electric kitchen appliance designed to toast multiple types of bread products. A typical modern two-slice toaster draws anywhere between 600 and 1200 W and makes toast in 1 to 3 minutes.

In pop-up or automatic toasters, bread slices are inserted vertically into the slots (generally only large enough to admit a single slice of bread) on the top of the toaster. A lever on the side of the toaster is depressed, thus activating the toaster. When an internal device determines that the toasting cycle is complete, the toaster turns off and the toast pops up out of the slots. The heating elements of a pop-up toaster are usually oriented vertically or parallel to the bread slice - although there are some variations.

In earlier days, the completion of the toasting operation was determined by a mechanical clockwork timer; the user could adjust the duration of the timer to determine the degree of "doneness" of the toast, but the first cycle produced lighter colour toast than expected compared to subsequent cycles because the toaster had not yet warmed up. Toasters made since the 1930s frequently use a thermal sensor, such as a bimetallic strip, located close to the toast. This allows the first cycle to run longer than subsequent cycles. The thermal device is also slightly responsive to the actual temperature of the toast itself. Like the timer, it can be adjusted by the user to determine the "degree of blackness" of the toast.

By comparison, toaster ovens are small electric ovens with a door on one side and a tray within. To toast bread with a toaster oven, one puts slices of bread horizontally on the tray, closes the door, and activates the toaster. When the toast is done, the toaster turns off, but the door must be opened manually. Many models are significantly larger than toasters, but are capable of performing most of the functions of electric ovens, albeit on a much smaller scale. They can be used to cook toast with toppings, like garlic bread or cheese, though they tend to produce drier toast and require longer operating times, since their heating elements are located further from the toast (to allow larger items to be cooked). They may also heat less evenly than either toasters or larger electric ovens, and some glass cookware cannot be used in them.

Conveyor toasters are designed to make many slices of toast and are generally used in the catering industry, being suitable for large-scale use. Bread is toasted at a rate of 350-900 slices an hour, making conveyor toasters ideal for a large restaurant that is constantly busy and demands a high output. However, such devices have occasionally been produced for home use as far back as 1938, when the Toast-A-Lator went into limited production.