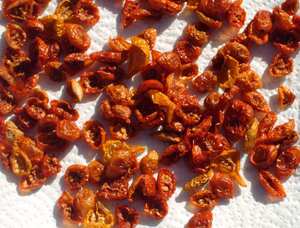 Sun-dried tomatoes are tomatoes that are preserved by salting and then left to dry in the sun. They may be flavoured by adding herbs and spices during the dehydration process. It is common for them to be packed in oil to further preserve them.

The flavour of sun-dried tomatoes is superior to the original tomato as it is more concentrated.

Don't waste the oil once the tomatoes are used as it still has loads of flavour and is wonderful for salad dressings.