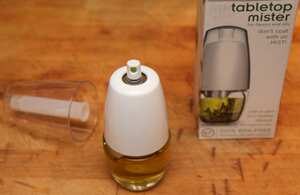 An Oil spray or oil mister allows cooking oil to be applied in a fine mist by a re-fillable pump or sealed aerosol resulting in fewer calories per serving than traditional application by pouring or brushing.

Which is the best?

I have never used an aerosol spray, I like to use my own oil.

I have tried the Masterclass re-fillable spray which would intermittently emit a single jet of oil instead of a spray, covering eveything with lots of oil. I would regularly leak oil too.

I have just ordered the Prepara Deluxe Oil Mist Sprayer which has the best reviews I have seen so far.

The one pictured works reasonably well. Sometimes it emits a stream of oil, rather than an aerosol so you do need to test spray first. (I think that's an unfortunate attribute of all of these 'DIY' aerosols, my last one did the same too.) It's a pity because if they worked as an aerosol all the time, they would be fantastic. 4 out of 10.

I now give this 9/10. The instructions say 3 of 4 pumps then spray. This as described above often resulted in a solid stream of oil, not a spray. However I have recently discovered that if I pump it about 10 times (or more), it works perfectly. More than 2 years later, this is a tool we use all the time. Would not be without it.