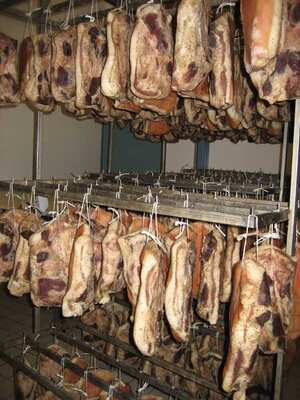 Speck is a distinctively juniper-flavoured prosciutto originally from Tyrol, a historical region that since 1918 partially lies in Austria and partially in Italy. Speck's origins at the intersection of two culinary worlds is reflected in its synthesis of Italian salt-curing and central European smoking.

In parts of the English speaking culinary world, the term "speck" refers to Italian speck, a type of prosciutto, rather than German speck, which is identical to the Italian "lardo".

Speck is ubiquitous in the local cuisine of the province of Bolzano-Bozen, and is also found in the Austrian, Czech, Dutch, German, Italian and Slovak cuisines.

Like other salami, speck is often served in paper thin slices which, like prosciutto, can be draped over sugary fruits like melon, pears and figs. Tissue-thin slices of speck can also be served with horseradish, pickles and dark rye bread studded with raisins and nuts, a more Austrian-influenced presentation.

Typically appearing in pastas, in risotto, on pizzas, and alongside hearty whole-grain breads, speck can also be seen in the company of shellfish, sometimes wrapped around scallops or rolled about breadsticks and served with lobster salad. Speck can be cut into thick strips and added to pasta sauces or any dish beginning with a soffritto of olive oil and chopped vegetables. In dishes like risotto, the extremely strong flavour of speck can usually be cut with light flavours such as parsley, lemon, mint, etc. In salads, speck pairs well with apples, sprouts, mushrooms, and hearts of celery.

Speck can easily replace bacon or as a smoky alternative to Pancetta. The differences between speck and bacon include different time lengths of smoking, the technique of curing it, and the fact that speck cures for a longer period of time than bacon does.