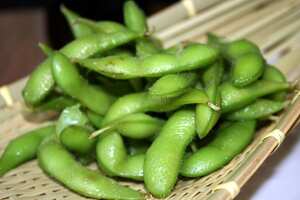 Edamame is a preparation of baby soybeans in the pod commonly found in Japan, China and Korea. The pods are boiled in water together with condiments such as salt, and served whole.

Outside East Asia, the dish is most often found in Japanese restaurants and some Chinese restaurants, but has also found popularity elsewhere as a healthy food item.

The Japanese name edamame is commonly used in some English speaking countries to refer to the dish. The Japanese name literally means "twig bean" (eda = "twig" + mame = "bean"), and is a reference to the short stem attached to the pod. This term originally referred to young soybeans in general. Over time, however, the prevalence of the salt-boiled preparation meant that the term edamame now often refers specifically to this dish.

Green soybeans in the pod are picked before they ripen. The ends of the pod may be cut before boiling or steaming.

The pods are then boiled in water or steamed. The most common preparation uses salt for taste. The salt may either be dissolved in the boiling water before introducing the soybean pods, or it may be added after the pods have been cooked.

Other condiments can also be used. Jiuzao; literally "wine dregs", made from the highly fermented grain residue left over from the distilling of rice wine, can be used to add fragrance and flavour. Some recipes also call for Sichuan pepper for taste. Five-spice powder can also be used for flavouring.

Boiled soybean pods are usually served after cooling, but can also be served hot.

The beans are consumed by using one's fingers and teeth to squeeze them out of the pod. The pod itself is discarded.