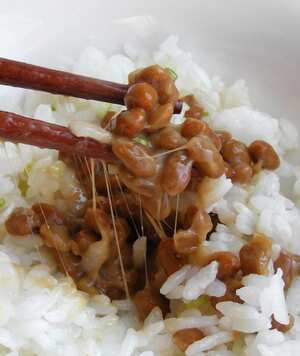 Nattō is a traditional Japanese food made from fermented soybeans, popular especially for breakfast. As a rich source of protein, nattō and the soybean paste miso formed a vital source of nutrition in feudal Japan. For some, nattō can be an acquired taste due to its powerful smell, strong flavour, and sticky consistency. In Japan nattō is most popular in the eastern regions, including Kantō, Tōhoku, and Hokkaido.

Nattō is made from soybeans, typically a special type called nattō soybeans. Smaller beans are preferred, as the fermentation process will be able to reach the center of the bean more easily. The beans are washed and soaked in water for 12 to 20 hours. This will increase the size of the beans. Next, the soybeans are steamed for 6 hours, although a pressure cooker can be used to reduce the time. The beans are mixed with the bacterium Bacillus subtilis natto, known as nattō-kin in Japanese. From this point on, care has to be taken to keep the ingredients away from impurities and other bacteria. The mixture is fermented at 40°C for up to 24 hours. Afterwards the nattō is cooled, then aged in a refrigerator for up to one week to add stringiness. During the ageing process at a temperature of about 0°C, the Bacilli develop spores, and enzymatic peptidases break down the soybean protein into its constituent amino acids.

Historically, nattō was made by storing the steamed soy beans in rice straw, which naturally contains B. subtilis natto. The soy beans were packed in straw and then left to ferment. The fermentation was done either while the beans were buried underground underneath a fire or stored in a warm place in the house as for example under the kotatsu.

Today's mass produced nattō is usually sold in small polystyrene containers. A typical package contains 2 or 3 containers, occasionally 4 containers, each of 40 to 50 g. One container typically complements a small bowl of rice. It usually includes a small packet of tsuyu and another packet of karashi, a type of mustard. Other flavours of sauce, such as shiso, are available.

Mito City and Kumamoto Prefecture are famous as nattō-producing districts.

Outside of Japan, nattō is sometimes sold frozen, and must be thawed before consumption.

User:Robin has some good photographs and links to an interesting article on eating natto. (in Dutch with an English translation)