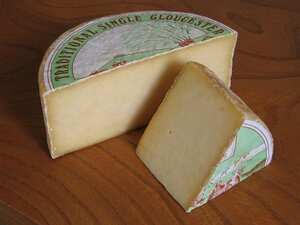 Single Gloucester cheese is a PDO cheese which can only be produced in Gloucestershire and whenever possible, the milk of the Gloucester breed of cow must be used. There are only 5 producers of the cheese, Diana Smart of Churcham being one of them.

The cheese is made from a mixture of morning and evening milk, the former being whole milk and the latter, skimmed milk. The milk is unpasteurised and the cheese is made with vegetarian rennet. It is allowed to mature for at least 3 weeks, so is milder than its cousin Double Gloucester.

Smart's Single Gloucester has been described The Real Cheese Companion as having: "a deliciously light texture and beautifully balanced taste, with a cool, clean tang and grassy sub-flavours."

It has an pale colour and traditionally the cheese was made in wheels about half the size of Double Gloucester but nowadays the wheels can be of various weights. Smart's make cheeses weighing 3.4kg, 1.5kg and 0.34kg.