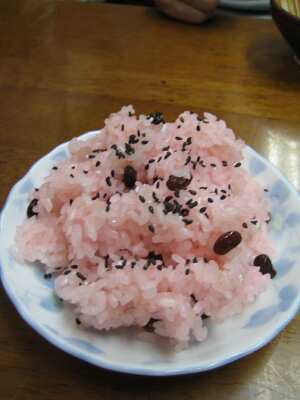 Sekihan, literally red bean rice, is a Japanese traditional dish. It is sticky rice steamed with azuki beans, which give a reddish colour to the rice, hence its name.

Sekihan is often served on special occasions throughout the year in Japan, for example, birthdays, weddings and some holidays, such as Shichi-Go-San. Sekihan is so strongly connected with celebration that the phrase "Let's have sekihan" has acquired the meaning "Let's celebrate."

It is usually eaten immediately after cooking but it may also be eaten at room temperature, such as in a celebratory bento (boxed lunch). Sekihan is traditionally eaten with gomashio (a mixture of lightly toasted sesame and salt).