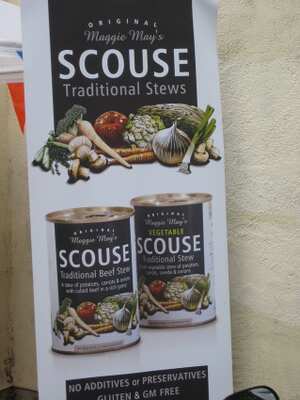 As well being the food (a very traditional and local stew from the northwest of England), the word scouse can also refer to a person who comes from Liverpool as well as the dialect of English spoken in that area.

Scouse is a type of lamb or beef stew. The word comes from lobscouse (originally lob's course) or lapskaus, Norwegian for "stew" and refers to a meat based stew commonly eaten by sailors throughout Northern Europe, which became popular in seaports such as Liverpool.

The traditional recipe for Liverpool Scouse consists of a cheap cut of lamb, or in earlier days, mutton (such as breast, forequarter or "scrag end of neck"), removed from the bone and browned in a large saucepan, to which are added chopped onions, carrots, and water or meat stock, and then as many potatoes as possible to 'fill it out'. The sauce is not thickened, and it is usual to serve with preserved beetroot or red cabbage and white bread with butter. An even more impoverished variety of this dish is 'blind Scouse' which contains no meat at all. Either recipe should more rightly be considered a potato stew.