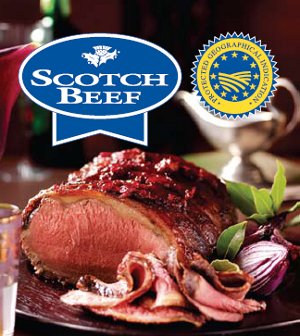 PGI Scotch Beef is derived from cattle finished in Scotland which have been slaughtered and dressed in abattoirs located in Scotland. After slaughter and dressing the beef may be marketed as a whole body, as a whole side, as part sides (hindquarter/forequarter) or as cuts of beef. Typically presentations of the product may be described as follows:

The area in which the cattle are finished, slaughtered and dressed for subsequent marketing is defined as the mainland of Scotland from the border with England including the islands off the West Coast, Orkney and the Shetland Isles.

At least since the turn of the 19th century, and probably before, Scotch beef has enjoyed a reputation in the market place as being distinctly different to beef from other countries and as having a quality and characteristics attributable to Scotland. These are:

Since 1974 the Scotch Quality Beef and Lamb Association has funded a continuous advertising programme to support the product. The product is identified at the point of sale as Scotch Beef and this is against the trend of current practice in the retail trade where identification of the country of origin of beef at the point of sale is not a common practice. Consumer recognition of the product is high. It is recognised as a premium product and it is priced accordingly.

For generations Scotch Beef has been renowned for its consistently superior qualities in terms of presentation, flavour and succulence and it has established a high reputation in the UK meat market and beyond. Traditionally fed on lush green pasture, the product is much sought after and demands a premium price.

It boosts the economy of Scotland and it provides employment for a significant number of people. There is therefore a high level of commitment to maintaining the reputation of Scotch meat and to meet growing consumer demand for Scotch beef. This has led the industry to initiate quality assurance schemes which are aimed at selecting superior carcasses which have been produced, dressed and cut by fully trained people. The industry's marketing efforts are buttressed by the Scotch Quality Beef and Lamb Association established in 1974 by the National Farmers Union of Scotland. The Association is funded by levies and it is governed by a board which includes representation from all sectors of the Scottish meat trade. The Association undertakes extensive marketing activities in the wholesale, retail and catering markets in the UK and overseas, and it has provided support and encouragement in developing the quality assurance schemes mentioned above.

Each farmer controls his own herd and the cattle are sold for slaughter when they reach a suitable stage of finishing. The cattle may be sold on a deadweight and grade contract or by auction. In each case the producer is required to certify that the cattle were finished in Scotland for a period of not less than 3 months as required by the Commission Regulation on determining the origin of the meat and offal, fresh, chilled or frozen of certain domestic animals. Abattoirs are required to maintain records to ensure traceability of each lot purchased.

The cattle are slaughtered and subsequently dressed in accordance with the relevant specification defined in the Standard Conditions for Deadweight Purchase of Cattle, Sheep and Pigs - published by the Meat and Livestock Commission (MLC). During the dressing operation carcasses are normally split lengthways into two sides of equal proportion. The slaughter number, the date of slaughter, the classification details and the cold weight of the carcass/sides is recorded on each carcass/side or on a label attached to it. After dressing the carcasses are transferred to a temperature controlled environment where they are held until they are dispatched to customers or transferred to a cutting area for cutting into hind/forequarters and/or for breaking down into cuts of beef. If the sides/part sides are to be divided into cuts, they will be prepared and packaged in accordance with customer requirements. After which they will be held in a temperature controlled environment until despatch to customers.