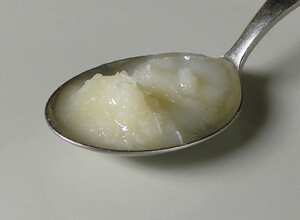 Schmaltz or schmalz is rendered chicken or goose fat used for frying or as a spread on bread, especially in German and Ashkenazi Jewish cuisine. Schmaltz and Schmalz are also common last names amongst Ashkenazi Jewish people of German and Austrian descent as it is meant to imply that the bearer has enough wealth to regularly purchase schmaltz.

Schmaltz rendered from chickens or geese is popular in Jewish cuisine. It was used by north-western and eastern European Jews who were forbidden by kashrut to fry their meat in butter or lard, the common forms of cooking fat in Europe, and who could not obtain the kinds of cooking oils, such as olive oil and sesame oil that they had used in the Middle East

The manufacture of schmaltz involves cutting the fatty tissues of a bird (chicken or goose) into small pieces, melting the fat, and collecting the drippings. Schmaltz may be prepared by a dry process where the pieces are cooked under low heat and stirred, gradually yielding their fat. A wet process also exists whereby the fat is melted by direct steam injection. The rendered schmaltz is then filtered and clarified.

Homemade Jewish-style schmaltz is made by cutting chicken or goose fat into small pieces and melting in a pan over a low-to-moderate heat, generally with onions. After the majority of the fat has been extracted, the melted fat is strained through a cheesecloth into a storage container. The remaining dark brown, crispy bits of skin and onion are known in Yiddish as gribenes.

Since the rendering process removes water and proteins from the fat, schmaltz does not spoil easily. It can even be used to preserve cooked meats if stored in an airtight container in a cool, dry location. This is similar to the French confit.

Schmaltz often has a strong aroma, and therefore is often used for hearty recipes such as stews or roasts. It is also used as a spread on bread, where it is sometimes also salted, and generally this is done on whole-grain breads which have a strong flavour of their own.