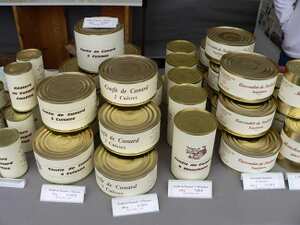 Confit (French) is a generic term for various kinds of food that have been immersed in a substance for both flavour and preservation. Sealed and stored in a cool place, confit can last for several months. Confit is one of the oldest ways to preserve food, and is a speciality of southwestern France.

Confit of goose (confit d'oie) and duck (confit de canard) are usually prepared from the legs of the bird. The meat is salted with herbs, and slowly cooked submerged in its own rendered fat, in which it is then preserved by allowing it to cool and storing it in the fat. Turkey and pork may be treated similarly. Meat confits are a speciality of the southwest of France (Toulouse, Dordogne, etc.) and are used in dishes such as cassoulet. Although confits are now considered luxurious, these preparations originated as a means of preserving meats without refrigeration.

Rillets of pork or duck, which I guess are technically confits, are the hidden treasures of French cuisine. Try them out next time you are in a French supermarket. Serve on a fresh baguette with lime juice and freshly ground black pepper.