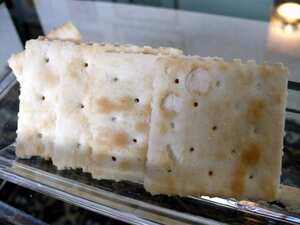 A saltine or soda cracker is a thin, usually square cracker made from white flour, shortening, yeast, and baking soda, with most varieties lightly sprinkled with coarse salt. It has perforations throughout its surface, to allow steam to escape for uniform rising, and along the edges, as individual crackers are broken from larger sheets during manufacture. It has a very dry and crisp texture, as it is made with less shortening than varieties such as Ritz crackers.

Some familiar brand names of saltine crackers in the United States are Christie's Premium Plus, Nabisco's Premium, Sunshine's Krispy and Keebler's Zesta. Low-sodium saltines as well as unsalted-top versions are commonly available. Whole grain saltines can also be found. In the United Kingdom they were made by Huntley and Palmers, and in New Zealand under Arnott's Salada.