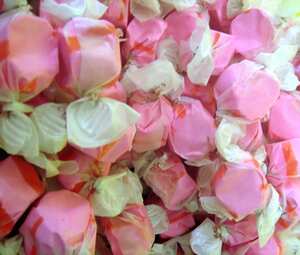 Salt water taffy is a soft taffy originally produced and marketed in the Atlantic City, New Jersey, area beginning in the late 19th century. Despite the name it does not contain salt water.

The real origins of how salt water taffy got its name are unknown. However, the most popular story, although probably questionable, concerns a candy-store owner, Mr. David Bradley, whose shop was flooded during a major storm in 1883. His entire stock of taffy was soaked with salty Atlantic Ocean water. When a young girl came into his shop and asked if he had any taffy for sale, he is said to have offered some "salt water taffy." At the time it was a joke, because all his taffy had been soaked with salt water. But the girl was delighted, she bought the candy and proudly walked down to the beach to show her friends. Mr. Bradley's mother was in the back and heard the exchange. She loved the name and so Salt Water Taffy was born.

According to Joseph F. Fralinger,

"By 1883, a Mr. David Bradley was advertising 'Taffy' at his stand on the Boardwalk near the David Lindy Baths at St. James Place. He sold six pieces of taffy for 5 cents with each piece folded in a square bit of paper with the four ends twisted together." To Joseph Fralinger's recollection, he was standing at Bradley's booth one day and a little girl asked for 'Salt Water Taffy'. Another asked for 'Ocean Wave Taffy'. Still another asked for 'Sea Foam Taffy'. This caused Fralinger to ask, "How many names have you for that candy?". They answered, "We let them call it any old thing!".

Whatever the origins, Joseph Fralinger popularized the candy by boxing it and selling it as an Atlantic City souvenir. Fralinger's first major competition came from candy maker Enoch James, who refined the recipe, making it less sticky and easier to unwrap. James also cut the candy into bite-sized pieces, and is credited with mechanizing the "pulling" process. Both Fralinger's and James' still operate stores on the Atlantic City boardwalk.

Salt water taffy was known to be sold along the west and east coastal areas, especially on boardwalks. It was known that if you went to the coast, one usually came home with salt water taffy. Sort of a souvenir.

Salt water taffy is still sold widely on the boardwalk in Atlantic City, and other touristed beachfront areas throughout the United States and Atlantic Canada.