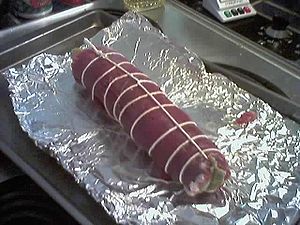 The word Roulade originates from the French word "rouler" meaning "to roll". Typically , a roulade is a European dish consisting of a slice of meat rolled around a filling, such as cheese, vegetables, or other meats. A roulade, like a braised dish, is often browned then covered with wine or stock and cooked. Such a roulade is commonly secured with a toothpick, metal skewer or kitchen string. The roulade is then sliced into rounds and served. Of this common form, there are several notable dishes:

The second most common form of roulade consists of a souffle-type mixture baked in a flat pan rolled around a filling. Appropriate to the meaning of the word however, a roulade may refer to any such "rolled" dish, such as sushi, and is not limited strictly to the European dishes.

After much experimenting, I have discovered the best knot to tie kitchen twine on your own is the Surgeons' knot.

Roulades can be sweet as well as savoury. The second most common form of roulade consists of sponge cake or cake baked in a flat pan rolled around a filling. Cake rolled around jelly, chocolate buttercream, nuts or other fillings, is an example of a sweet roulade like the cake Bejgli or the Swiss roll.