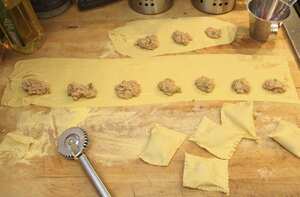 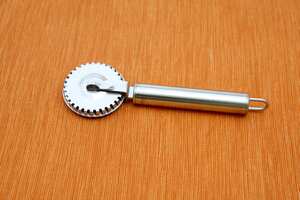 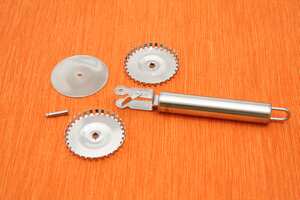 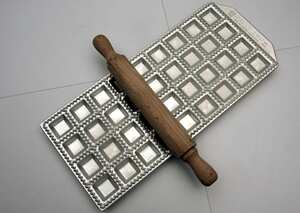 Ravioli can be made at home using homemade pasta, rolled into sheets with a pasta machine or a rolling pin.

A sheet is laid on a lightly floured board. The filling is placed on the pasta at regularly spaced intervals along one edge, the edges are moistened by egg-whites or water and the sheet folded over and the joins pressed down to seal. The ravioli cutter is used to separate and seal each ravioli.

After using the ravioli cutter shown, a few times, I'm of the opinion that a pizza cutter and a fork (to seal the edges) is a far better way. The ravioli cutter shown tends to clog up and pull the ravioli along as you roll it. It would be perfect if the castellated wheel was solid. Its easy enough to dismantle and clean, but if it were solid it would just need brushing under running water.

Making ravioli with a ravioli tray

I have to admit I have never had any success with this ravioli tray and have just assigned it to the dustbin. There is almost no space for the filling. When you do eventually roll it out, the filling oozes out. If that doesn't happen, then you will spend the next hour, picking the individual ravioli out of the cells. Sorry being negative, but that's what I have spent the last hour doing!