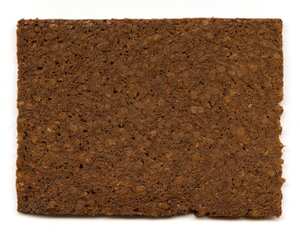 Pumpernickel is a type of German bread traditionally made with coarsely ground rye. It is now often made with a combination of rye flour and whole rye grains. It has been long associated with the Westphalia region of Germany. The first written mention of the black bread of Westphalia was in 1450. While it is not known whether this, and other early references, refer to precisely the bread that came to be known as pumpernickel, there has long been something different about Westphalian rye bread that elicited comment. The defining characteristics of Westphalian pumpernickel are coarse rye flourârye mealâand an exceedingly long baking period. The long slow baking is what gives pumpernickel its characteristic dark colour. The bread can emerge from the oven deep brown, even black. Like most all-rye breads, pumpernickel is traditionally made with a sourdough starter; the acid preserves the bread structure by inactivating the highly active rye amylases. The process is sometimes short-circuited in commercial baking by adding citric acid or lactic acid along with commercial yeast.

Broadly speaking, there are two different pumpernickel traditions -- the Westphalian pumpernickel, made almost completely from rye and a sourdough starter, and the American Jewish tradition, in which the bread is closer to a basic American rye bread with rye flour for flavour and wheat flour for structure.

Traditional German pumpernickel contains no colouring agents, instead relying on the Maillard reaction to produce its characteristic deep brown colour, sweet dark chocolate coffee flavour, and earthy aroma (however, it is not uncommon to use darkly toasted bread from a previous batch as a colouring agent). Loaves produced in this manner require 16 to 24 hours of baking in a low temperature (about 250°F or 120°C) steam-filled oven. The bread is usually baked in long narrow pans that include a lid. Like the French Pain de mie Westphalian pumpernickel has little or no crust. It is very similar to rye Vollkornbrot, a dense rye bread with large amounts of whole grains added.

A separate pumpernickel bread tradition has developed in America. The American pumpernickel loaf approximates the dark colour of traditional German pumpernickel by adding molasses, coffee, cocoa powder, or other darkening agents. In addition to colouring and flavour agents, American bakers often add wheat flour (to provide gluten structure and increase rising) and commercial yeast (to quicken the rise compared to a traditional sourdough). Because of the ways in which American bakers have changed the original German recipe, and for economic reasons, they tend to eschew the long slow baking that is characteristic of German pumpernickel. The result is a loaf that resembles commercial American rye bread -- a bread made with a mix of wheat and rye flour -- but with darker colouring. Many bakers also add a significant amount of caraway seeds, providing an alternate flavour that is now characteristic of many American commercial pumpernickel (and light rye) breads.

American pumpernickel loaves are almost always baked without a baking pan, resulting in a rounded loaf. These breads do not have the dense crumb of a traditional German pumpernickel, and have a rather different flavour profile derived from the added darkening agents and the faster baking process.

American pumpernickel bread is associated with Jewish cuisine and can often be found in stores that sell "Jewish rye" and other Jewish deli foods. In addition, American pumpernickel dough is sometimes combined with light rye dough to produce a type of bicoloured rye bread known as "marble rye", as well as being made into bagels.