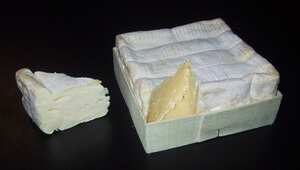 Pont-l'Évêque is an AOC and AOP cows’ milk cheese, originally manufactured in the area around the commune of Pont-l'Évêque, between Deauville and Lisieux in the Calvados département of Basse-Normandie, and is probably the oldest Norman cheese still in production.

The cheese is un-heated and un-pressed, with a square shape of around 10cm square and about 3cm high, and weighing 400g. The interior is soft and creamy pale yellow in colour with a smooth, fine texture with a pungent aroma. It is surrounded by a washed rind that is white with a gentle orange-brown colour. The cheese is soft when pressed but lacks elasticity. It is generally ranked alongside Brie, Camembert, and Roquefort as one of the most popular cheeses in France.

The cheese has been made in Normandy since at least the 12th century, and local legend claims that it was first made in a Norman abbey. A manuscript from the time writes that a fine meal should always end with some "angelot", the name used for the cheese at the time.

The cheese became popular across the country from the 16th century onwards, when it obtained the name of the village around which its production was centred.

The AOC regulations include the following restrictions:

The milk must come from a controlled area around the village of Pont-l'Évêque, extending to the départments of Calvados, Eure, Manche, Mayenne, Orne and Seine-Maritime.

The curd must be successively divided, kneaded and then drained.

Whilst maturing, the cheeses must be washed, brushed and turned.

The resulting cheese must be one of three sizes:

The cheese must mature for least 2 weeks, though most are left for over 6 weeks.

Regulations currently allow both pasteurised or unpasteurised milk to be used during manufacture.