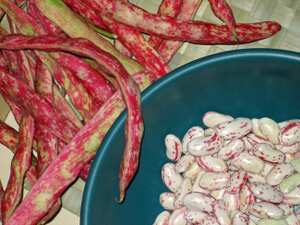 The pinto bean or mottled bean (Spanish: frijol pinto, literally "painted bean") is named for its mottled skin (compare pinto horse), hence it is a type of mottled bean. It is the most common bean in the United States and northwestern Mexico , and is most often eaten whole in broth or mashed and refried. Either whole or mashed, it is a common filling for burritos. The young pods may also be used as green beans.

In the southwest United States, the pinto bean is an important symbol of regional identity, especially among Mexican Americans. Along with the chilli, it is one of the official state vegetables of New Mexico (under the name frijol). The prepared beans are commonly known as frijoles. This type of bean is also referred to as "Cowboy Beans" in Texas, all along the Mexican border and wherever Mexican cowboys were employed. In areas where Mexican cowboys did not travel on the trails north from Texas, it was probably not known.

This is the most commonly used bean used for refried beans (fresh or canned) and in many dishes at Tex-Mex restaurants. Rice and pinto beans served with cornbread or corn tortillas are often a staple meal where there is limited money for meat, as the combination of beans and corn creates all the protein amino acids needed in a meat substitute. When it comes to making chili, if a bean is added, this is the one typically used, although the kidney bean, black bean, and many others may also be used in other locales.

Pinto beans look the same as cranberry and borlotti beans, but differ in taste.

How to cook pinto beans in a pressure cooker