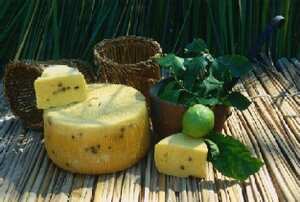 Piacentinu di Enna aka Piacentinu Ennese DOP Sicilian cheese is a compact pressed cheese made from the raw, whole milk, with natural acidity from fermentation, of sheep of the native Sicilian Comisana, Pinzirita and Valle del Belice breeds and their crosses. On release for consumption, it has the following physical characteristics:

The sheep are fed on natural and/or cultivated pasture land, with fresh fodder, hay and straw from the production area referred to in point 4, wheat stubble and by products of vegetable cultivation: prickly pear cladodes, offcuts from olive trees from winter pruning, all from the production area. The sheep are usually put out to pasture for most of the year. Restrictions on pasture feeding are permissible where atmospheric, climatic or health conditions are likely to have an adverse effect on the quality of the fresh fodder and/or the milk. This may be supplemented with cereal grain, legumes and simple or complex non-GMO concentrates. Such supplements may be given to the sheep only on those winter days in which they cannot go out to pasture.

The production area for Piacentinu Ennese consists of the municipalities of part of the western area of the province of Enna in Sicily: Aidone, Assoro, Barrafranca, Calascibetta, Enna, Piazza Armerina, Pietraperzia, Valguarnera, Villarosa where native sheep are traditionally bred and are fed on natural or cultivated pastures with local ecotypes and where saffron has grown for centuries.

The orographic conditions and the Piacentinu Ennese production area's distance from the sea, which gives it its characteristically subcontinental climate, contribute to the production of fodder with special quantitative and qualitative characteristics and to its availability throughout the year. Production takes place in an area characterised by brown soils on gently sloping ground with distinctive pasture areas that are particularly suited to fodder production. The land is at 400 to 800 m above sea level. The flora of the natural pastures consists essentially of grasses and legumes with local ecotypes predominating.

The fodder grown after the grain harvest generally consists of local vetch ecotypes grown with oats and sulla clover. Moreover, the typical environmental conditions of the Enna area are particularly suited to the production of high-quality saffron.

The particular characteristic of Piacentinu Ennese consists in adding saffron to the milk during the cheesemaking process, giving it its characteristic even yellow colour. This characteristic is in addition to its special smell resulting from the essences of the pasture of the area whose aromas, which come from naturally occurring substances or ‘terpenes’, pass unchanged into the milk and then into the cheese produced from it.

The characteristic of the cheese is its even yellow colour which it gets from the saffron grown in the area and added to the milk during cheesemaking. The high content of crocin and picrocrocin attests to the quality of the saffron used. This has made it possible to place Enna saffron in quality category I and II and its specific aromatic qualities make the final product's bouquet more intense and characteristic.

The province of Enna is, thanks to the lack of industry, a green pollution-free oasis which enhances the ecological value connected to the agricultural and pastoral activity. Sheep farming, including sheep milk production, has a very low environmental impact. The production area's orography and its sub-continental climate result in pastureland of special quantitative and qualitative characteristics; sited at between 400 and 800 m above sea level, the brown soil lands, which are mostly clay, sandy and semi-compact, favour the growth of pasture with a particular aromatic profile resulting from naturally occurring substances of vegetable origin, such as ‘terpenes’, which pass unchanged from the pastureland essences into the milk and then into the cheese produced from it. The presence of a particular terpene, ‘α-terpineol’, has been found in Piacentinu Ennese; it comes exclusively from the pasture essences present in Enna which give the product its unique and particular aroma.

The ancient origins of cheesemaking in the province of Enna together with the traditional production of ewes' milk and the presence of both wild and cultivated saffron gives credence to the explanation given by old cheesemakers for the expression ‘piacentinu’. According to such direct sources, the term refers to the pleasing nature of the product: indeed, the pleasing quality of its flavour, which is not too spicy, is also due to the presence of saffron.

The origin of the word is from the local idiom: ‘piacentinu’ from Sicilian ‘piacenti’ or ‘pleasing’, refers to its ‘pleasing nature’ and the name ‘piacentinu’ is recorded in old texts such as ‘Le Venti Giornate dell’Agricoltura e dei Piaceri della Villa’ ‘Twenty Days of Agriculture and Pleasures of the Town’, dating from the 16th Century, which makes reference to the regular adding of salt and saffron in order to give the cheese more colour; or in ‘La Sicilia Passeggiata’ (‘Walks through Sicily’) by Maja in the 17th Century, and even from an old legend involving Ruggero il Normanno (Roger I of Sicily) who, worried about the mental health of his consort afflicted by depression but with a craving for cheese, asked his cheesemakers to make a cheese with magical properties. This gave rise to the idea of adding to the curds a dash of ‘crocus sativus’, known for its stimulating and energy- giving properties. Production of this cheese continued over the centuries down to our days, becoming an undisputed and exclusive part of the historical, cultural and production heritage unique to the province of Enna.