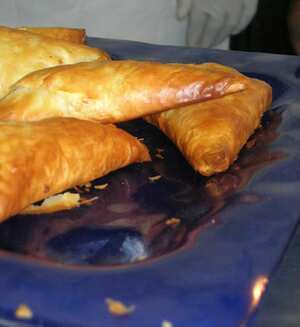 Pastries made with phyllo pastry

What is Phyllo pastry?

Phyllo dough is made with flour, water, and a small amount of oil. It is almost always used in multiple layers separated by melted butter. When these are baked, they become crispy and the result resembles puff pastry, though the method is very different, and they are generally not substituted for one another. Phyllo is used in many of the cuisines of the former Ottoman Empire. The individual sheets are layered with butter and other ingredients, then baked to make flaky pies and pastries, including baklava, börek, gözleme, spanakopita, tyropita and bstilla. Rolled out dough layers (made of starch) are also used for making güllaç, a Turkish dessert mostly eaten in the holy month of Ramadan. Phyllo layers together with walnuts and rose water are placed one by one in warm milk. A similar Egyptian dessert is called Umm Ali.

Homemade phyllo takes time and skill. It requires progressive rolling and stretching of the dough to a single, thin and very big sheet, with continual flouring of its surface, which tends to break apart. A very big table and a long roller are used. Once finished, the phyllo is floured, folded, then used as desired. Most phyllo is made with wheat flour and water, but some dessert recipes call for egg yolks in addition.

Phyllo pastry for domestic use is widely available from supermarkets, fresh or frozen.