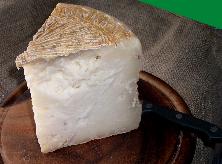 Pecorino della vallata Stilaro-Allaro is hard, unpasteurised ewes' milk cheese which is mixed with goats' milk from Calabria. It is a medium or mature cheese which weighs 1-2kg and is cylindrical in shape. It has a hard rind, with furrows impressed into it from the basket in which it is moulded. It starts off as white in colour, with a pleasant, delicate flavour, becoming more yellow, full bodied and spicy as it ages.