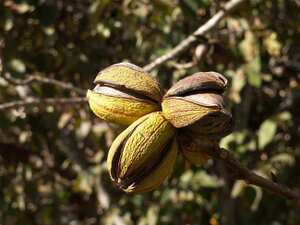 The pecan nut is the edible kernel from the fruit the pecan tree, a large deciduous tree, growing to 20–40 m that is a native of North America. Pecans are now grown commercially in other areas of the world, but America still grows more than 80% of the world's pecans.

The nuts of the Pecan are edible, with a rich, buttery flavour. They can be eaten fresh or used in cooking, particularly in sweet desserts but also in some savoury dishes. One of the most common desserts with the pecan as a central ingredient is the pecan pie, a traditional southern U.S. recipe. Pecans are also a major ingredient in praline candy, most often associated with New Orleans.

How much does one cup of pecan nuts weigh?