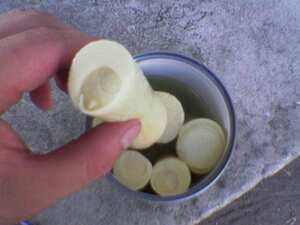 An alternative to wild heart of palm are palm varieties which have undergone a process of adaptation to become a domesticated farm species. The main variety that has been domesticated is the botanical species Bactris gasipaes, known in Ecuador as “chontaduro,” in Costa Rica as “pejibaye”, and in English as the “peach palm.”

Peach palms are self-suckering and produce multiple stems, up to 40 on one plant, so harvesting several stems from a plant is not so expensive because the plant can live on. Another advantage it has over other palms is that it has been selectively bred to eliminate the vicious thorns of its wild cousins. Since harvesting is still a labor intensive task, palm hearts are regarded as a delicacy.

As of 2008, Costa Rica is the primary source of fresh palm hearts in the US. Peach palm is also cultivated in Hawaii, and now has limited distribution on the mainland, but mostly only to the restaurant trade.