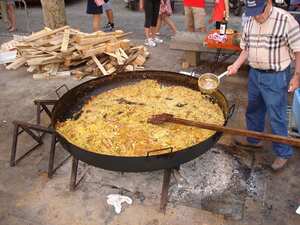 Paella being cooked in the street (Barcelona)

Paella is a rice dish which originated in Spain's Valencian region near lake Albufera, an east coast lagoon. Many non-Spaniards view paella as Spain's national dish. Most Spaniards however, consider it to be a regional Valencian dish. Valencians, in turn, regard paella as one of their identity symbols.

Most paella chefs use Calasparra or Bomba rices for this dish. Other key ingredients include saffron and olive oil.

This dish has gained considerable popularity throughout most of the Spanish-speaking world and among Hispanics in the United States and is now enjoying increasing popularity throughout Western Europe as it is becoming much easier to locate the paella pans, paella cooking equipment & ingredients needed. For example in the UK all the necessary equipment and ingredients can be sourced from such companies as: